Fire Strike was a great vintage hit by Pragmatic Play back when it came out in 2019. It was an impressive Vegas-style slot package with not too shabby returns up to 27,000x the bet. The raging retro heat vibes are back again in the studio’s recently released and highly anticipated sequel Fire Strike 2.

It comes packed with features just like its predecessor, retaining the best ones and adding some new stuff. The highest winning potential is not as impressive as the original, but it’s still pretty close. It helps that the sequel has a better hit rate, and paired with some obvious Pragmatic trademarks, it’s no wonder why it’s one of the hottest slots in the online gambling industry right now.

A medium-volatile sequel to the 2019 hit, Fire Strike 2 offers familiar, yet updated action. It retains the 96.50% RTP, but this time the volatility is purely medium instead of ranging on high. There are still 10 paylines with the scatter pays system which offer instant rewards up to 25,000x the bet. Random sticky Fire Strike symbols in the bonus round are a new addition, just like the free spins bonus itself.

If you love retro slots, it doesn’t get any more vintage than this. The visuals are pretty much the same as in the original slot, with those kitsch fires under the sevens and BARs. They add a touch of retro vibes to the popular game, with other symbols being ripped out of Vegas-style slot machines. 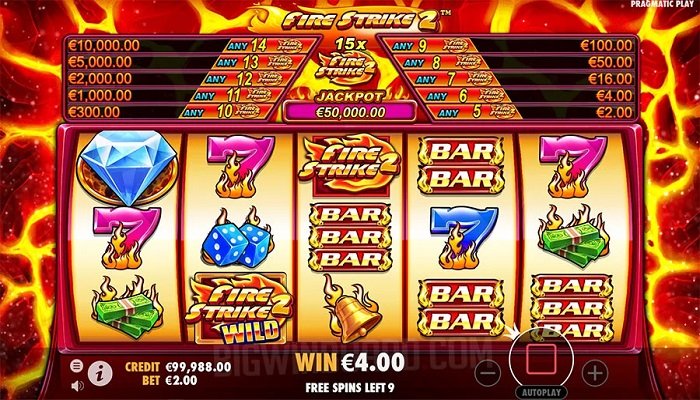 The slot’s 5×3 setup is easy to understand, so even if you’re a new player, you shouldn’t have trouble spinning the reels. You’ll see a paytable for the scatter rewards on top of the reels, clearly indicating that you get instant prizes for 6-15 Fire Strike scatters. The top prize is worth 5,000x the bet for 15 scatters, and you can hit that at any point in the base game or bonus round.

Easier Scatter Jackpots in the Bonus Round

To make things different than the original slot, Pragmatic Play has added a bonus round to this one. Fire Strike 2’s free spins round is triggered by three or more diamond scatters. You get 12 free spins in a bonus round that plays similarly to the base game with one notable difference – the highest jackpot scatter win now needs 14 Fire Strike symbols instead of 15.

Any Fire Strike symbol that lands on the reels during the bonus may turn sticky. This is significant as 15 Fire Strike symbols (scatters or not) can land you the top reward worth 25,000x the bet. Of course, luck needs to be on your side in a big way for this cash prize, but hey, who wouldn’t like to take a shot at it? The good news is that the bonus can be retriggered with three scatters on the same spin, giving you 12 extra spins.

Fire Strike 2 is a worthy sequel to the original Pragmatic hit with an even better hit rate. With a bit of luck those scatter jackpots could be yours, so give the kitschy retro reels a spin or two and see what you come up with.

Fire Strike 2 is a worthy sequel to the original Pragmatic hit with an even better hit rate.

With a bit of luck those scatter jackpots could be yours, so give the kitschy retro reels a spin or two and see what you come up with.