Online casino fans are no strangers to modern themed slots. These games have taken over the online gambling market, bringing a fun vibe and pushing the creative limits of traditional slot gameplay. While we often see crazy and unique themes with these games, it’s rare to find exclusive titles that manage to bring the heat and deliver an out-of-this-world experience. Of course, it’s impossible, and iSoftBet proves that! The operator has released an exciting new title called MegaSantos Megaways that you can only find on Betclic for the Portugese market.

As some of you might have assumed, there’s a good reason why MegaSantos Megaways is only available to online gambling fans in the Portuguese market. The slot is heavily inspired by the Portuguese culture, featuring beautiful postcard-ready locations from various parts of the country, mouth-watering traditional dishes, and many other elements unique to the area. These elements are scattered all over the game, but they’re most prominently featured in the game’s backdrop, symbols, and even its up-beat music!

Of course, just because the game is exclusive to Betclic doesn’t mean other players can’t appreciate the beauty of Portugal through this game. They might have a bit of trouble reaching the title with the language barrier surrounding the operator, but once you get there, you can feast your eyes on a beautifully designed slot that knows how to keep players engaged. 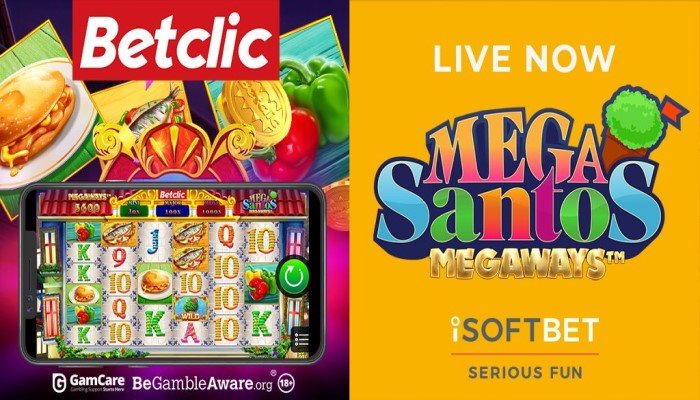 It’s no secret that parties are a big part of Portuguese culture, and MegaSantos Megaways takes advantage of that fact to showcase exciting gameplay features that make every spin a party all on its own. The game boasts features like Cascading Wins, Modifiers, Hold & Win, and many more!

To trigger the Cash Respins from the Hold & Win bonus round, players need to land at least five MegaSantos Scatters during gameplay. While this round is active, the number of Megaways is fixed, and players are granted three Respins. The fun doesn’t stop there. For every successful spin, the count is reset! Naturally, players can accumulate more symbols during this time and stack up Multiplier values.

Another thing to remember about the bonus round is that it comes with three different jackpots! This feature is an iSoftBet staple and includes a Mini, Major, and Mega Jackpot. Naturally, this addition can lead to some highly rewarding wins. Additionally, if you’re lucky enough to encounter an entire reel filled with Scatters, a multiplier is applied to all the symbols on that reel.

While MegaSantos Megaways isn’t the first custom product designed by iSoftBet, it’s undoubtedly one of the most fun slots made by the iGaming provider. Portuguese slot fans are in for an action-packed treat with this gem, one that pays homage to their culture and all of the excitement that comes with it.