NetEnt Has Launched the Latest, Much-Anticipated Addition in Its Gonzo Series, Gonzo’s Gold!

Gonzo makes another comeback on the reels this year, now searching for the long-lost gold. NetEnt has launched Gonzo’s Gold, the latest and hotly-anticipated title in the popular series.

The well-loved character is back, now taking you on a brand-new adventure, where with the aid of the Cluster Pays mechanics, you’ll be able to join him in the search of the gold.

Even though we’ve been seeing a lot of Gonzo in the past decade, we’re never enough of this well-loved character, invented by NetEnt way back in 2011, which still has us on the hook. Gonzo, the bearded and brave adventurer has hopped on another yet adventure, this time searching for gold in the pyramid, in the latest slot addition Gonzo’s Gold.

The explorer will now go through an Incan temple, a golden pyramid, where you’ll be able to join him for a highly volatile gaming experience. The 5-reel, 5-row slot was released five days ago, on the 14th of October, and is already getting the attention it deserves across all NetEnt-powered online gambling sites. Mainly because it features the player-favourite mechanics, the Cluster Pays. 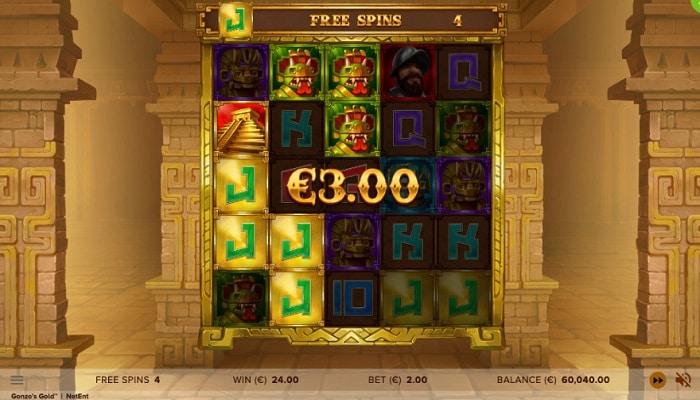 But, as you will see, the slot is also loaded with features that can take you to great prizes. When you land three or more Scatters, you get 10 Free Spins along with an awesome bonus prize. When the bonus game starts, you get to experience a Pick-And-Click game, which will help you transform one symbol into an Expanding Symbol for the round, which is the star feature of the game. Land two or more of these symbols and they will cover an entire row or reel, giving you an extra win!

The Developer’s Statement on the Launch

The Chief Product Officer at Evolution, Todd Haushalter said that they had put a bit of a twist on what players would actually expect from a Gonzo game. That twist was replacing the bet lines and transforming them into a Cluster Pays title with a Free Spins round that includes an Expanding Symbol feature.

As Haushalter added, they were always looking to challenge what players expected from a gambling experience, and this was an exciting new take on the beloved character. Both existing and new players, according to Haushalter, were going to thoroughly enjoy the next stage of Gonzo’s journey!

About the Gonzo Brand

As you may as well know, Gonzo first appeared in 2011, with the original title Gonzo’s Quest, and has since been featured as one of the most popular games across all NetEnt-powered online casinos. But, as you as well know, with Evolution acquiring Netent and Red Tiger, Gonzo made new appearances in the last couple of years. Gonzo’s Quest Megaways was launched by Red Tiger, and most recently, Evolution itself launched a Live Casino version, which became an instant hit, called Gonzo’s Treasure Hunt. Now, you’re getting a new slot addition to the series, so make sure you give Gonzo’s Gold a try the first chance you get, to see what all the fuss is about!