One of Microgaming’s Jackpots Has Delivered a Massive €3.8 Million Prize to a Lucky Player

Home › News & Articles › One of Microgaming’s Jackpots Has Delivered a Massive €3.8 Million Prize to a Lucky Player

Microgaming’s progressive jackpot networks are delivering life-changing prizes left and right. This time, the WowPot pot has been hit by a Swedish player who won €3.8 million.

The player decided to try out one of the latest progressive jackpot titles by Microgaming, designed by Triple Edge Studios, Ancient Fortunes: Poseidon WowPot Megaways. After putting in a few spins, the Swedish player was left shocked seeing that they have hit a €3,898,637.78 prize!

News about colossal wins on Microgaming’s jackpots is appearing left and right. That’s because the developer has, throughout the years, launched many jackpot pots in its progressive jackpot network. These different pools with different tiers are making so many players richer than ever, across different top-notch games. But the best thing is, the leading developer in the online gambling industry continues launching new pots across new games, to maximize players’ opportunities to win a life-changing prize.

The latest huge win delivered by one of its progressive jackpot pots is the one that was hit a few weeks ago. It was hit on one of Microgaming’s latest progressives, Ancient Fortunes: Poseidon WowPot Megaways. As implied by its name, this is a slot from the Ancient Fortunes series, which not only features the WowPot pot but also offers the Megaways mechanics, meaning it is enhanced with features that can deliver staggering prizes. And a Swedish lucky player can definitely vouch for this since they won over €3.8 million playing this game at VideoSlots Casino. 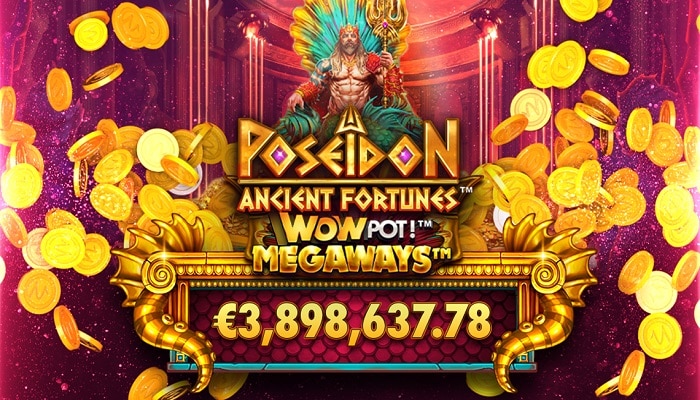 Now, even though Microgaming took its time to check the authenticity of the win, and announced the news of the big win just a week ago, the player hit this mind-blowing win on the 23rd of August, 2021. The win-delivering slot was actually launched four days before. And, the last time the WowPot has delivered a historic win was on the 14th of April, 2021. That April win was the second largest in the WowPot’s history, and the fourth one that created a millionaire out of a simple player.

The Developer and the Casino Extend Their Congratulations

John Coleman, Microgaming’s CEO issued a statement congratulating the Swedish player, as well as the VideoSlots Casino for the incredible payout. Coleman explained that it was a great honour to see another massive WowPot win happening just days after the win-delivering slot was launched at the casino and network-wide.

William Ahlberg, VideoSlots Casino’s Head of Commercials stated that they were super-excited to be providing their players with access to Microgaming’s legendary jackpot slots. But he was especially pleased to hear that one of VideoSlots’ players has managed to scoop the huge €3.8 million prize, becoming a millionaire thanks to the WowPot pot!

More About the Win-Delivering Game

As mentioned, Ancient Fortunes: Poseidon WowPot Megaways is one of the latest titles added in the Ancient Fortunes series. But, it is also the first slot to offer both the progressive pot WowPot (first presented in February this year) and the mega-popular BTG mechanics Megaways. It was designed by Triple Edge Studios under an exclusive deal with Microgaming. It offers an underwater theme and is packed with features, so not only does it offer game-changing payouts but it is also really fun to play. After reading about this huge win, we’re sure you’ll give it a try!

How to Improve Your Online Gaming Experience?