With summer officially over, slot providers have shifted their focus from sunny beach-themed games in picturesque locations to more traditional ones that bring back nostalgia. Of course, this is excellent news for most online gambling veterans! These games are the perfect trip to the golden slot era, featuring classic elements from old-school slot machines updated to fit today’s modern technological marvels. One of these fun new releases comes from leading provider Pragmatic Play. It’s tapped into the magic of ancient Aztec mythology to bring us a game that’s hard to resist.

A Colorful Journey to the Past

As the game’s title suggests, Aztec Blaze is inspired by the ancient Mesoamerican culture that used to span several parts of South America. While it might not dig too deep into this fascinating culture and its way of life, it does take elements from it to tell a fun story in the online gambling world! In the game, users act as explorers, journeying to the jungle. They’re met by a breathtaking golden temple carved with intricate symbols representing Aztec deities and different parts of the culture’s mythology.

While the temple backdrop is stunning, to say the least, the beauty of this game is in the reels! The gold-rimmed reels feature stylized letters and numbers that have become slot staples, but that’s not all. Players will find stunning gems carved to resemble local wildlife, including an alligator, a gecko, a bird, and several other animals. A few other classic slot symbols make an appearance too. These include a bejeweled Wild Symbol and an Aztec pyramid similar to the game’s background. 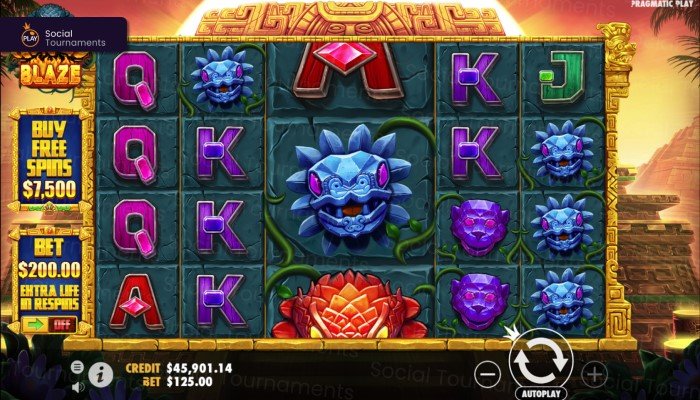 If you’re wondering whether Aztec Blaze’s colorful theme has matching gameplay, the answer is yes! The 6×4 reels feature 25 paylines and tons of exciting symbols that can score players big wins. When players land a win, a Larger Symbol appears on the reels. As a special surprise, the first win will grant a Colossal Symbol for the next go! The Larger Symbols start with a size of 2×2, but they can go up to 4×4 if they’re related to the next win. What’s more, subsequent wins have an increasing win multiplier of up to 10x! If you happen to lose, the symbols reset.

While the classic gameplay of Aztec Blaze is already exciting enough, players also have the chance to enter a staple Pragmatic Play Free Spins Round! This feature is activated by landing two Scatter Symbols and grants players five lives. Each loss will reduce the life count by one until it runs out and players are returned to the classic game. During this round, players will experience many more colossal symbols and multipliers that don’t reset.

Aztec Blaze is easily one of Pragmatic Play’s most adventurous titles. The slot is a colorful explosion of fun bound to capture your attention the minute you lay your eyes on it. It’s a throwback to classic themes in old-school slot machines but manages to marry this old-school charm with modern gameplay elements and updated graphics and features. Whether you’re a newbie to slots or a grizzled casino veteran, this game’s appeal transcends experience, and it’s a perfect match for anyone interested.