Yggdrasil and Darwin Gaming Partner up to Release Baccarat Evolution

With the Live Casino scene growing more popular by the day, it can often seem like classic RNG table game titles are left behind. Unfortunately, this is true to some extent. New classic RNG table games are rarely produced at the moment, and while developers have moved on to different types of content, many players haven’t! Despite the success of Live Casino classics, RNG table games get as much traction as ever. Since there’s still tons of market value in these fun titles, iGaming powerhouse Yggdrasil and indie game studio Darwin Gaming have partnered to meet this demand.

A New Spin on a Classic Game

Baccarat has been a staple in the online gambling scene for ages. Alongside Blackjack and Roulette, the game is a part of the big three casino table games that dominate both land-based and traditional gambling venues! It’s safe to say that we’ve seen tons of Baccarat variations throughout the years. Every game developer worth their salt has at least one Baccarat title in their line-up, both in their Live Casino collection and their RNG one. Sure, the market might be saturated with many excellent Baccarat titles, but that doesn’t mean there’s no room for something new!

To refresh their table game content, Yggdrasil has partnered with Darwin Gaming to release the new Baccarat Evolution title. As you can imagine, the name of the game sums it up nicely. Baccarat Evolution takes all the elements of classic Baccarat and gives them a well-deserved glow-up with a modern twist! Players have more control over how the game plays out, including a Peak and Reveal feature, a choice of themes, and Turbo Mode!

All three of these features are much appreciated. The Peak and Reveal feature gives players a chance to manually reveal cards by swiping their fingers across their mobile screen. This ups their control over the game and simulates a more real-life atmosphere. The themes affect how you play the game, but they’re mainly there for aesthetic reasons. In any case, they’re an excellent addition! Lastly, we have the Turbo Mode feature. As you can probably guess, this feature gives players the chance to experience faster gameplay, making it the perfect choice for gaming on the go! 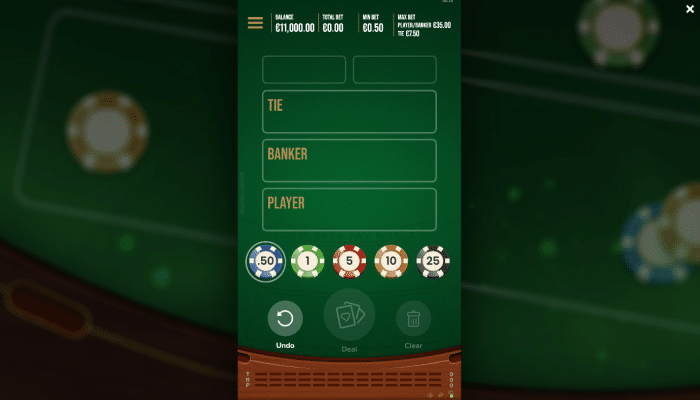 VIP versions of classic games are not a novelty in the online casino scene. In most cases, these variations take the base game we all know and love and build on it by increasing the betting limits or adding extra features. We’re happy to say that Baccarat Evolution VIP is available, and it’s the perfect option for players seeking bigger risks! While the base is practically unchanged, the game is aimed at high rollers. It boasts significantly increased betting limits that garner much better rewards!

Baccarat Evolution is the first game released by Darwin Gaming under Yggdrasil’s YG Masters portfolio. While it’s early to say how the partnership between the two will progress, this seems like a promising start! Baccarat Evolution is a beneficial release for both studios, and the companies seem more than excited for their collaboration! Following this strong first release, we can’t wait to see what these powerhouses have planned for the future!