Mardi Gras might be months away at the time of writing, but people worldwide can’t help but be excited about the upcoming celebration! With themed slots becoming a go-to in today’s online casino world, it should come as no surprise to learn that some providers have already begun planning for the event by releasing exciting slots inspired by the spooky culture surrounding it. One of these chilling new releases is Voodoo Hex by Yggdrasil and Peter & Sons. This collaborative effort dives into the horror theme without missing a beat, while still keeping things light and fun overall.

Yggdrasil and Peter & Sons are well-known companies in the online gambling world. The provider and game studio are always on the prowl for new opportunities, so their latest collaboration makes perfect sense. We’re happy these juggernauts have decided to join forces on a new release, and a horror-themed one no less! The title of this game gives much of the premise away. Set in the French Corner, the title transports players into a creepy Voodoo shop where old-school magic lives and breathes in the modern world.

The classic 3×3, five-payline setup of the game works perfectly with the animated design. While spinning the reels, players will encounter a host of symbols inspired by magic, mystery, and the afterlife. These include shrunken heads, voodoo dolls, voodoo priestesses, tarot cards, and more! All of these symbols fit together perfectly, and the lively animations help bring them to life and foster an eerie atmosphere that ups the excitement. 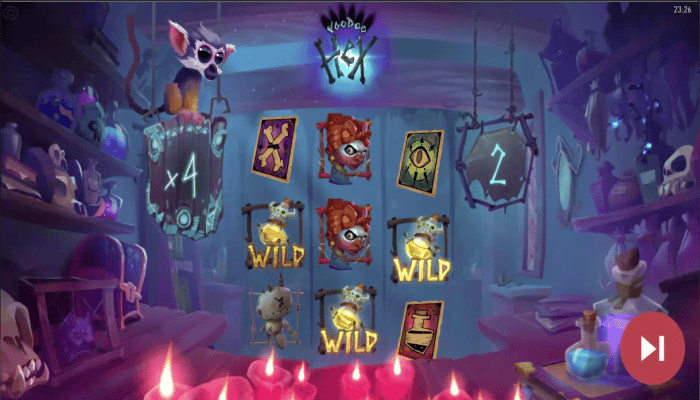 Voodoo Hex’s design is undoubtedly eye-catching, but what gives this game an extra boost is the set of excellent features it boasts. During gameplay, Wilds can pop up on any of the reels. If two reels happen to be stacked with the same symbol, players are granted Mystery Stack Respin! Thanks to this feature, players are treated to Respins until no more Mystery Symbols are on screen. The feature also adds a Progressive Multiplier that increases by one for each win during the mode!

Another thing to keep an eye on is the Coin Symbols. These symbols give players a prize instantly, no matter where they land. Additionally, if you happen to land a Scatter Symbol on the center of one of the reels, you’ll trigger Free Spins! During the bonus round, players will encounter Mystery Stacks more frequently. To top it off, the increasing Multiplier doesn’t reset at this time. Finally, Yggdrasil Gaming has also included a Bonus Buy feature that sends players directly to the Free Spins mode. This feature is only available in certain jurisdictions.

Voodoo Hex is an excellent addition to any online casino. Its layout is simple enough for newbies, but its features are complex enough to keep even the rowdiest casino veterans engaged. The slot’s unique horror theme is the perfect fit for the high-strung action it provides, so we can happily say that Yggdrasil and Peter & Sons have outdone themselves with their latest joint effort.