Yggdrasil, the innovative software developer and gaming solutions provider is about to host the never-before-seen Slots Battle 2020 at the ICE London!

This unique event will give players the chance to experience ultimate gaming, for which they will grab a €9k prize!

Yggdrasil Slots Battle 2020 – Everything You Need to Know

In association with CasinoGrounds and CasinoBeats, Yggdrasil will host a first-of-its-kind live streaming event called Yggdrasil Slots Battle 2020. The event will take place at CasinoBeats’ event networking drinks during ICE London, and will involve three teams, each made up of one streamer and one operator, which will compete grab the highest single coin win on Temple Stacks, Yggdrasil’s newly-released slot machine. Temple Stacks is, by the way, the developer’s first slot to feature the brand new Splitz mechanics.

Widely-known CasinoGrounds streamers Slotspinner, LetsGiveItASpin and Nickslots will compete against each other together with Yggdrasil’s partner operators Dunder, Rizk and Casino Calzone. The operator that gets the highest single coin win will be the tournament winner and will be rewarded by Yggdrasil with a sponsored campaign at a value of €10k. During the hour-long tournament, though, players will also be able to take advantage of a €9k Cash Drop.

The tournament is organized by SBC (Sports Betting Community) and is scheduled for the 5th of February, between 6 pm and 7 pm at the [email protected] during ICE London 2020. More than 300 key industry shareholders are expected to attend. The one which will moderate the event is Yggdrasil’s CEO Fredrik Elmqvist. 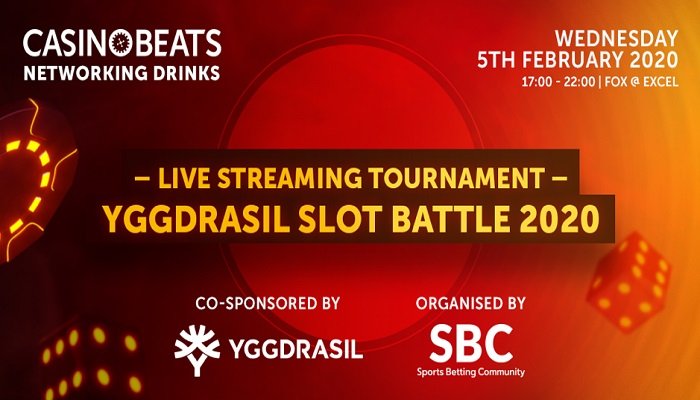 Statements by the Partners

Elmqvist said that at Yggdrasil, they were always at the forefront of innovation and finding new ways for the content to reach new audiences was at the top of their agenda. He added that they were working closely with the streaming community and using streamers increasingly, as they helped raise awareness of Yggdrasil’s games as well as drive traffic to the developer’s partner operators’ sites. They were all excited to showcase the collaboration by hosting the fun competition and couldn’t think of a better place to do so than at the ICE London, the industry’s biggest event of the year.

CEO of CasinoGrounds Tobias Svensen added that from its inception in 2016, CasinoGrounds had grown from a small forum of online casino streamers to one of the leading casino community in the world. He added that online casino streaming would only continue to grow as it offered a fun and fresh way for operators to promote their games and they were excited to show industry representatives how it could add something extra to the online gambling experience with this tournament.

This is a one-of-a-kind opportunity to witness a Slots Battle, so if you’re interested in attending, you should visit Yggdrasil’s stand N3-140 on the 5th of February at the ICE London 2020.