Our number 1 casino
Check out our Online Casino Section!

Even if you’re not a casino fan and you’ve never played at a casino table, there are great chances that you’ve heard of blackjack. Along with poker and roulette, blackjack forms the major trio of casino games and is probably the most popular of the three. 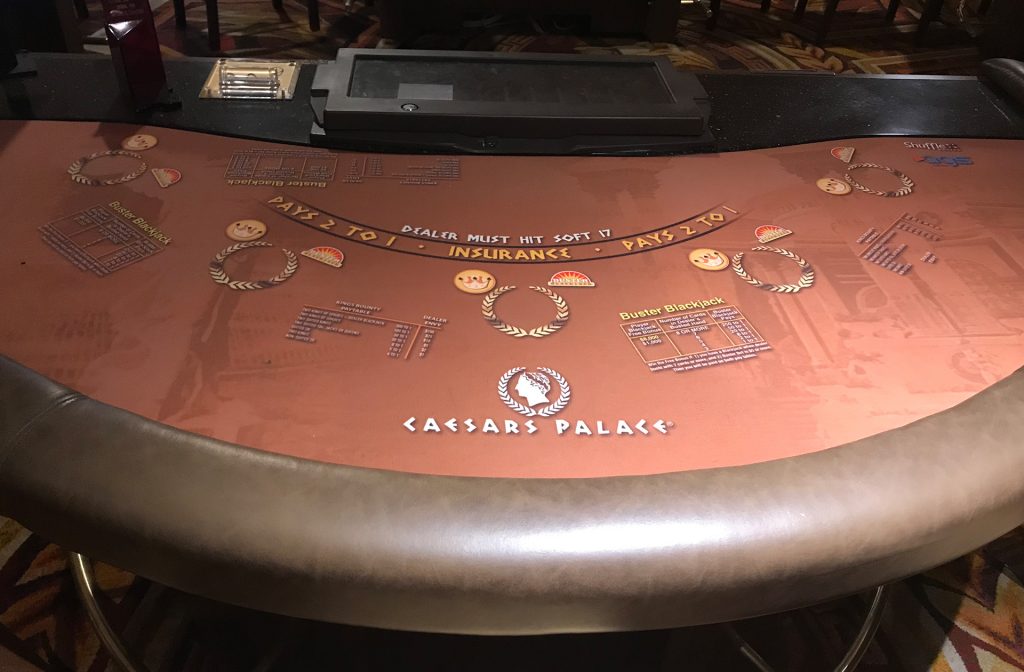 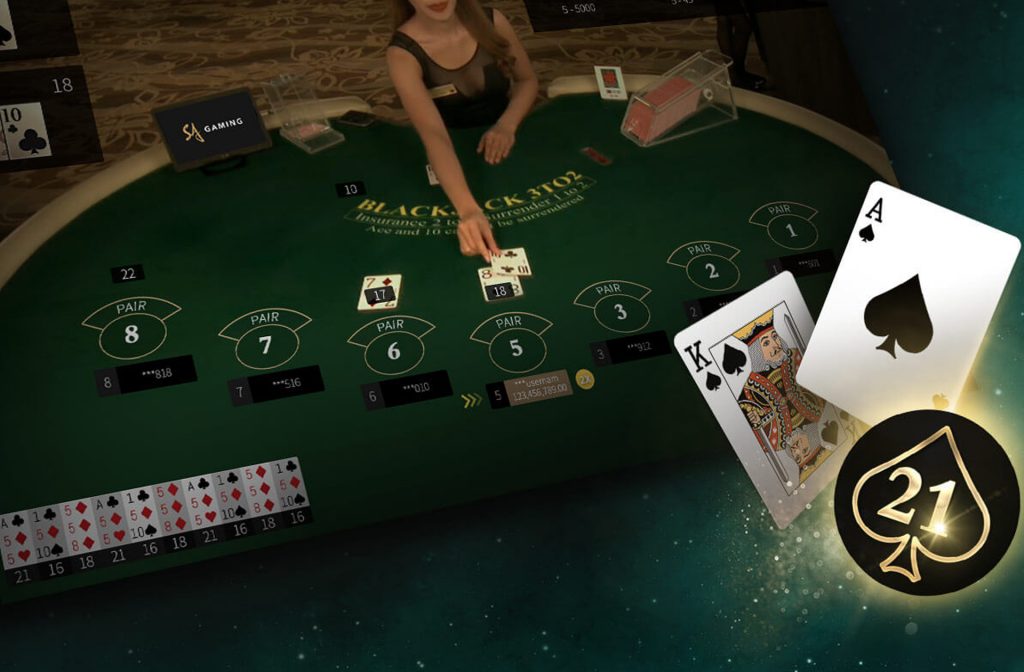 At European Blackjack, the dealer starts with one card 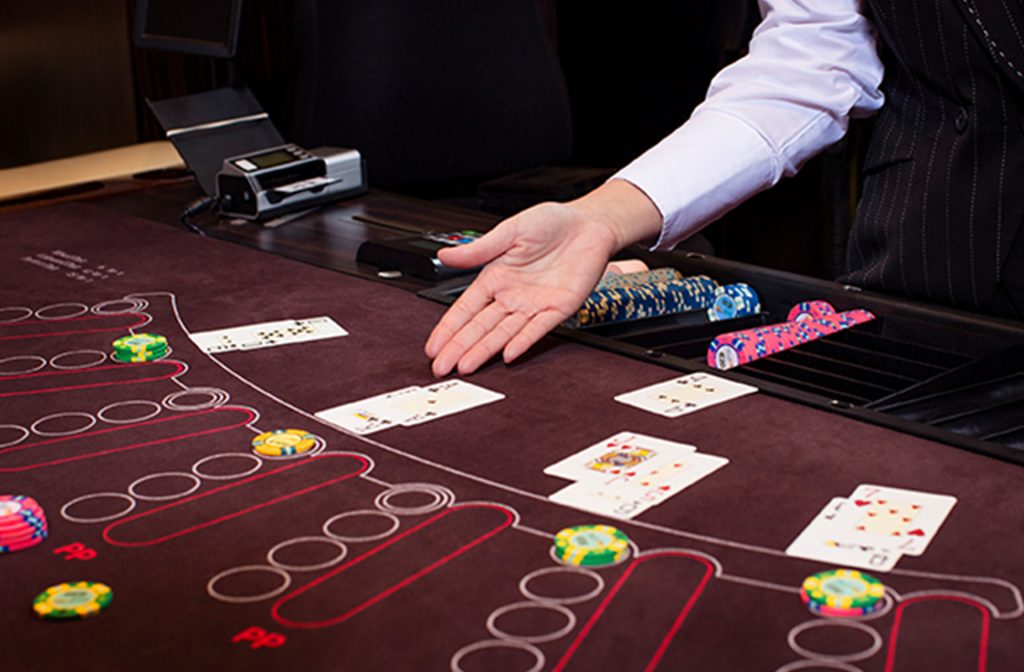 The Goal of Blackjack

First of all: Blackjack is a cardgame. The goal of blackjack is pretty simple, you’re supposed to reach 21 by building your ‘hands’ and playing smart. Players need to beat the dealer’s hand without crossing the barrier (21) or let the dealer go bust by playing with smaller cards.

You can practise Blackjack here

First things first – let’s talk about the blackjack table and the basic set of rules. A blackjack table has a dealing shoe at one end where the dealer stands and up to 7 spots for the players on the table. In front of each spot, there’s a small box where players place their bets and the cards are dealt directly next to the box. In the middle of the table, the rules and main payouts are clearly visible.

Once all players place their bets, the game begins with the dealer dealing cards from the shoe. He gets 2 cards just like all the players on the table, with one card face up. The players can receive their cards face up or down depending on the table. The value of the cards numbered 2-10 is their real pip value, while the Jack, King, and Queen have a value of 10. The aces are worth 1 or 11, and the total sum of the hand is the combination of the cards the player receives.

Not all blackjack games are equal, which is why it’s so important to know what variant you’re playing. Some variations favor the player, while others favor the dealer. There are many rule variations which stray from the standard rules of blackjack that players should know such as re-splitting aces, doubling down after splitting or surrendering early.

The DAS (double after splitting) rule is available at most casinos and favors the player over the dealer. It’s a simple rule that allows you to double down after splitting cards. Re-splitting aces allows a player to split up a pair of aces again if the extra drawn card brings him one. It’s a pretty advantageous rule for the player as the ace is the most powerful card in blackjack. Of course, casinos are aware of this and don’t allow taking more than one card after splitting an ace. You can’t double down as well, so the RSA (Re-splitting aces) rule comes with a few limitations.

Surrendering early does just what it says. It’s a rule that allows players to surrender before the dealer offers insurance or checks for blackjack. It’s a dead rule which isn’t present in the majority of casinos since the 1970s.

When playing blackjack, make sure you’re always at a table that offers a payout of 3:2. Many new casinos have started offering 6:5 blackjack that raises the house edge and takes more money out of players. It also renders card counting useless, so if you want to be successful at blackjack, always play at 3:2 tables.

The dealer must follow a strict set of rules and has no choices to make at all. The dealer will either draw new cards if the value of his hand is under 17 or stand if his hand value is higher than 17. Of course, this doesn’t include the dealer going bust (over 21) which makes all players at the table winners.

When the dealer’s hand has a value between 17 and 21, the result is compared to the hands of all players on the table. All who have a hand with a higher value win and it’s “Better luck next time” for everyone else.

Besides Spanish 21 and pontoon, there are many other blackjack variations players can enjoy. Of course, not all of them available at all casinos, due to the rule changes. But some are and offer a more exciting take on the popular card game.

These variations are a fun take on the popular card game and add pretty exciting rules that add a better dynamic to the game. Of course, they also make it more favorable for the player or the casino. So before you sit at a blackjack table, we strongly recommend learning all the rules. Also pay attention to the blackjack variations in a casino.

Although not as popular as poker tournaments, there are many blackjack tournaments every year. They offer a far more thrilling experience as you get to play against other players and the dealer as well.

Blackjack was one of the first casino games to be introduced to an online casino. With their stellar growth in the past few decades, the card game grew in popularity as well and it’s all thanks to the high number of variations.

Nowadays, it’s not uncommon to see more than 10 blackjack variations in online casinos that you can play. You can play them for fun or for real money. Live blackjack is especially popular as it offers all the thrills of a casino in your home. Thanks to the online versions of casino games like blackjack and roulette, online gambling is more and more popular every day.

♠️ What are Side Bets?

Most casinos nowadays offer side bets that give them a bigger advantage over players. One of the most common side bets is insurance, but you can also bet on getting a pair, bet if the dealer’s hand will match yours, betting on the dealer to bust, and more.

Side bets are offered at literally every table in every casino and are placed alongside the main wager. It’s important to know that they exist, but we wouldn’t recommend placing them. Most of these bets give the dealer advantage over you, so you’re better off without them.

♠️ Insurance or No Insurance?

Insurance is a side bet in blackjack that pays 2:1. It is offered when the dealer gets an ace, which puts them pretty close to a blackjack. The side bet is placed before the player’s decision. If you take the insurance, you will lose if the dealer doesn’t get blackjack on the next draw.

You’ll lose everything but the insurance bet (at odds of 2:1) if the dealer has a blackjack. This means that even though you’ve lost your original stake, you’ve at least won the insurance bet as a consolidation prize.

Blackjack experts never recommend taking up the dealer’s insurance offer, as it only serves as a way to take more of your money.

♠️ When to Stand in Blackjack?

Standing in blackjack means taking no action after your cards have been dealt. In this case, the player is satisfied with his hand and doesn’t want to alter it. The signal for standing is waving your hand over the cards. Of course, it makes no sense unless you’ve been dealt great cards, ideally a pair that forms a blackjack.

♠️ When to Hit in Blackjack?

Choosing to hit means signaling the dealer to deal a new card for the player as they want to improve their hand. The dealer will draw a card face up to the player, who can then decide to either hit or stand.

If the total sum of the player’s hand is under 17, another hit makes sense. If the player is satisfied after the first hit, he’s better off with a stand.

♠️ When to Split in Blackjack?

Splitting is an underrated move in blackjack that will greatly increase your chances of winning a round. This option makes sense when the player is dealt two equal cards which are better off split into two hands.

Of course, this means placing another bet. Equal in size as the original one. When the player splits his hand, the dealer gives him two additional cards to complete them. Depending on the casino and blackjack variation, players may split their hands up to 4 times.

In general, aces and eights should be split so you can get a better chance to win, while the cards you should never split are 10s and 5s.

♠️ When to Double Down on Blackjack?

The option to double down means to place a double bet on one more card and is available on a player’s starting and split hands. Players usually choose to double down when they have a card such as 9, 10 or an ace. After a double down, the player must to stand, so he doesn’t get additional cards under any circumstances.

How Did This Game Become So Popular?

Blackjack’s increasing popularity in Europe before the XX century was logical. It was a game for players with skill instead of luck. It gives players a sense of control. So everyone tries to get better at the game, until they master all its secrets. Additionally, blackjack offers great payouts. So as soon as it was available in European casinos, players stormed the tables.

It took a little persuasion from American gambling dens to popularize the game in the USA. Somewhere around 1930, blackjack caught fire in Nevada as well and made thousands of fans. It also inspired a few variations including pontoon and Spanish 21.

The Origins of Blackjack

Not much is known about Blackjack’s predecessor called twenty-one. The card game was mentioned in Miguel de Cervantes’ book Rinconette y Cortadillo where the main characters are cheaters trying to win money in the game of veintiuna (Spanish for 21). The book explained that the goal of the game is not to go over 21 and that the ace is valued 1 or 11. As the book was written at the very start of the XVII century, it’s most likely that the blackjack precursor was famous in Seville before that.

Twenty-one arrived in the USA centuries later. In order to stimulate players, gambling dens offered special bonuses for 21. That includes a 10:1 payout for a winning hand that contains an ace of spades and a black jack. The bet grew widely popular and was called ‘blackjack’ which led to renaming the game. Shortly afterward, casinos stopped offering the bonus. But the name still stuck, giving birth to the game we know today.

Why You Should Play Banker Bet in Baccarat

Most Popular Baccarat Side Bets