One thing the US doesn’t lack, apart from freedom, are daredevils ready to do all kinds of crazy bike stunts in front of tens of thousands of spectators. If they manage to do it right, they’ll become the latest heroes of the arena. That’s precisely what USA Flip is all about. The newest addition to the Swedish developer’s portfolio celebrates doing stunts on bikes and promises a decent share of excitement.

If you thought the game couldn’t be more American, then wait until you see the slot’s main character. An eagle is riding the dirt bike around the arena while wearing sunglasses and dressed in red, white, and blue. Surrounded by a loud crowd, everything is set for an epic stadium showdown!

Get Ready for Action

Despite its appearance, USA Flip is far from being the loudest game out there. It’s also one of the least volatile releases from Play’n GO we’ve seen in a long time. The slot’s maths model is rated four out of ten and may not suit some players. When it comes to the RTP, it’s available in multiple configurations. The payout percentage can go up to 96.20%, depending on the market, but we suggest checking it out before you play.

Players should have no problem finding a stake that matches their playing style. A stake of just $0.01 is enough to get the reels spinning, while $100 is the maximum amount of money you can wager on every spin.

USA Flip takes place on a five-reel, three-row grid with twenty paylines. As you may have guessed from the wagering options, the number of active lines can be adjusted. To get paid, simply land matching symbols on adjacent reels, starting from the far left. The paytable includes the usual playing card symbols, followed by gloves, helmets, fireworks, wheels and bikes. Five of a kind pay anywhere from 20 coins for low-value regulates to 250 coins for the premiums. Higher-paying icons can also appear stacked on the last two reels in the Main Game or the first two ones in Free Spins. Wilds are also there, paying the same as the highest-paying icon. In addition, they can replace other regulars to help form additional wins.

USA Flip offers a load of extras, including the Free Spins bonus round, Walking Wilds, and respins.

Land at least three Star Bonus Scatter symbols anywhere in view to trigger the Free Spins round. In addition to a cash reward, players will receive twelve spins. Living up to its name, the reels are flipped to increase the size of the available payouts. Three or more Scatters appearing during Free Spins will add twelve more freebies to the tally, up to a maximum of 120! 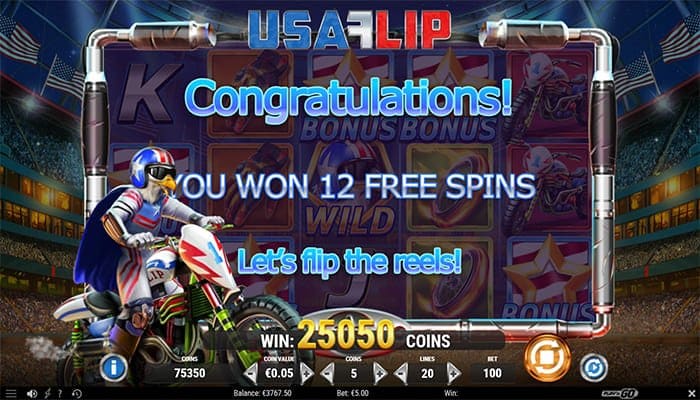 A respin is triggered after a losing spin when a stack of icons of the same type land on reels 1 and 2. The same goes for Wilds. All other reels stay locked while the middle one respins. The good news is that a respin can unlock Free Spins.

USA Flip is as American as it can get, although an eagle wrapped in red, white and blue seems comical. The near-win respin is not as an exciting addition to the gameplay as it looks. Walking Wilds don’t bring anything new, especially as they don’t boost the slot’s win potential. Sorry, Play’n GO, but 1,000x the bet is not an amount that will draw the attention of win-hungry players. Overall, it’s a decent experience, but not the one you’ll likely return to more often. Visit OnlineGambling24 today to discover more new releases.