Pragmatic Play Takes You to the Mongol Empire in Temujin Treasures

Ever wished to know more about the Mongol Empire and its great leader Genghis Khan? Now is the time to see the conqueror and his lifestyle in Pragmatic Play’s new Temujin Treasures slot.

The developer released the new title a few days ago, explaining that it took inspiration from the great leader Genghis Khan, and inviting you to try your luck on the 4×5 slot with 1,024 ways to win.

Prepare for a Quest to Discover the Temujin Treasures!

Pragmatic Play is one of those leading online gambling solutions and content providers that regularly releases new slot titles, up to five a month, but is also active in the Live Casino, virtual sports and bingo verticals. This month, after Eye of the Storm, Joker King and Fishin’ Reels, its ever-growing portfolio was crowned with the new launch, Temujin Treasures.

Inspired by the Mongol Empire and its leader Genghis Khan, one of the world’s most successful, but also most ruthless conquerors, the slot was actually named Temujin Treasures because this was Khan’s original name. Don’t worry, though, you won’t see Khan’s ruthless side in the slot, as the developer has twisted it with a jolly spin.

Temujin Treasures is a 4×5 slot that arrives with high volatility and mind-blowing 1,024 ways to win. The slot is packed with exciting features, including four jackpots. You will be showered with Multipliers and Free Spins, as well, all the while entertained by the vivid colours and the fortune cookie messages appearing on each win. The Eastern-inspired soundtrack in the background would most certainly complement the entire vibe. 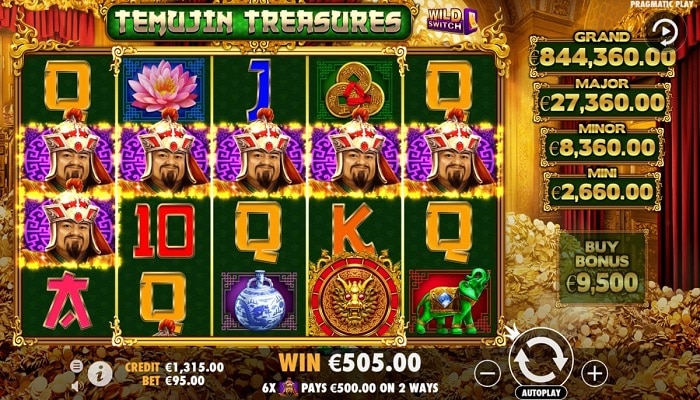 Now, the first feature you will come across is the Wild Switch, which is a thrilling modifier triggered when you land six or more matching symbols on the middle reels. Those symbols will be transformed into Wilds.

You will need to land the Scatter on the middle reels, as well if you wish to trigger the bonus feature. This is when you’re taken to the Wheel of Fortune, where you can win a variety of exciting prizes, including Free Spins, Multipliers or one of the four Jackpots.

The Lucrative Wheel of Fortune Prizes

Should the Wheel of Fortune land on the Multiplier or Jackpot segment, it will spin once again to deliver more prizes. You could win anywhere between 6 and 50 Free Spins when you get to the bonus feature.

When you see a Firecracker land during the Free Spins, you will receive a small bonus. The small bonus will deliver additional Free Spins, Jackpots, Wild Multipliers or Money Values. The overall payout you could scoop? Staggering, as you would imagine, of up to 9,000x the stake.

Pragmatic Play’s Chief Business Development Officer Yossi Barzely, when talking about the slot, said that the developer’s latest release took inspiration from the Mongol Empire and its leader Genghis Khan, therefore, it put an elegant twist on a ruthless chapter in the history of the world.

Barzely continued saying that the slot introduced a host of engaging bonus features that could take players to the most amazing wins, providing them with an experience that they would not be able to find anywhere else. So why wait any longer? Give it a try right away!

What Are Rolling Reels Slots and How They Work?

Microgaming Set to Release a Bunch of New Games This April!

Can You Decrease House Edge in Online Casino Blackjack?