Microgaming has launched its second take on the Tarzan legend a few days ago, releasing Tarzan and the Jewels of Opar slot network-wide.

The leading provider shared the exciting news several days ago, stating that the independent studio Gamesburger was the one in charge of the development.

Microgaming Releases Tarzan and the Jewels of Opar

Tarzan and the Jewels of Opar has gone live network-wide several days ago. It marks the second slot in the Tarzan series developed by Microgaming. The game is now live with all operator partners, following a hugely successful two-week exclusivity period with hand-picked operators.

It is the latest collaboration between the leading provider and one of its independent studios, Gamesburger. Gamesburger has created several slots as part of its exclusive premium content deal with Microgaming, but this title is special because it is the sequel to a 2016 slot by the developer.

The 20-payline slot is packed with exciting features and offers high-energy gameplay, suited to the punchy animation and the theme. You will see Tarzan on the reels as he returns to Opar, the legendary lost city in the jungle. His mission is finding the hidden treasure in the form of jewels. The Jewel Scatters appear on all reels. Land three or more of them, and you will trigger up to 7 levels of Scatter Jackpots. The prizes these jackpots can deliver are up to 5,000x the stake!

Naturally, you’ll see Tarzan swinging through the trees during the gameplay, randomly rewarding you with up to 15 Wilds on the reels. This could take you to a significant win potential, both in the base game and during the Free Spins. The Random Wilds appear at least once during the Free Spins, though, guaranteeing excellent wins. 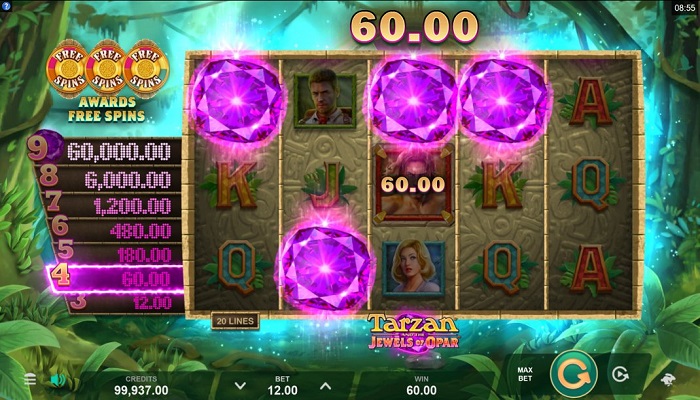 The Official Statement on the Release

Microgaming’s Director of Games, Andrew Booth, said that Gameburger had pulled off another amazingly thrilling and fun game with Tarzan and the Jewels of Opar, a slot that had all the hallmarks of a classic title by the online gambling genius Microgaming.

Booth added that the slot was an absolute hit during the exclusive early release period, consistently performing among the developer’s top five games per operator in terms of player attention alone. With that said, Booth ended his statement with a prediction, saying that players would love the new spin on a branded classic.

So far, Edgar Rice Burroughs Inc. has licensed several developers to release Tarzan-themed slots. Tarzan and the Jewels of Opar is actually the fifth slot of the classic fantasy adventure series, and Microgaming’s second title inspired by the tree-swinging legend. Microgaming has an exclusive licensing agreement with the company, brokered by Creative Licensing Corporation, to produce Tarzan-branded slots. Therefore, Tarzan and the Jewels of Opar won’t be the last Tarzan-inspired slot we’ll see from the developer, so give the new game a try, and hope for other new slots inspired by the legendary character to be developed soon.