Pirate-themed slots are great, but to be honest, the theme is a bit stale. The good news is that when pirates get the Microgaming treatment, you’re in for a wild ride. That’s certainly the case with 9 Skulls of Gold, another Buck Stakes Entertainment Epic Strike jackpots slot that will make you the pirate captain’s right hand.

The slot comes packed with great specs and gameplay features. It has an RTP of 96.33% paired with high variance and a solid math model. You can win across 20 paylines, including those Epic Strike jackpots which can pay up to 2,000x at any point in the game. Firepot skulls of gold award up to 30 free spins with a triple multiplier that can bring the booty on your deck.

Ready to plunder the seas, matey?

Plunder Without a Blunder

If you’re into pirate-themed online slots, this one’s the perfect pick. 9 Skulls of Gold is very similar to other Epic Strike slots, but this time you’re taking the high seas with a ransacking crew of crazy pirates. The goal is to find the gold hidden somewhere deep underwater, which can be done by landing those golden skulls.

The Epic Strike feature is the big highlight here. Land 3-9 golden skulls to win prizes up to 2,000x the bet. You’ll need plenty of luck to hit 9, but hey even 5 or 6 can pay nicely. 9 Skulls of Gold is a pretty simple slot to play. It has a 5×3 setup with all the controls underneath the reels. The grid is set against a beautiful background that looks over a bay somewhere in tropical waters.

You can hit rewards easily with the Epic Strike symbols at any point in the base game. But, get to the bonus round and you can expect even bigger and more frequent wins. You access it with three Scatters which take you on a special wheel. This wheel of rewards can give you up to 30 free spins with an x3 multiplier that can take your wins to the next level. 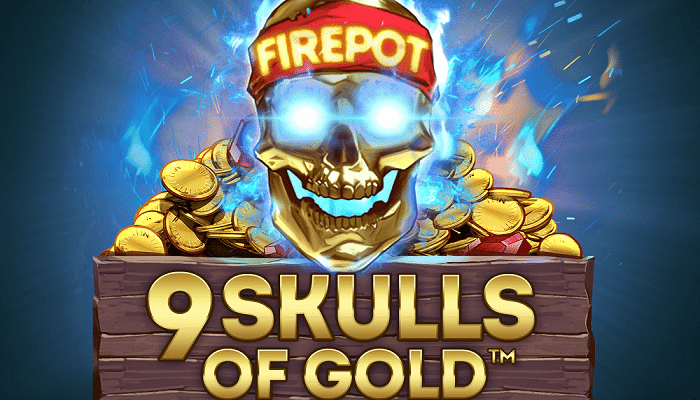 Compared to the other pirate release, this isn’t a Megaways slot. It only has 20 paylines, but those are more than enough to deliver a pirate’s booty right in your hands. If you’re in love with pirates, this is a plunder you don’t want to miss.

Buck Stakes Entertainment has been here before. Not a long time ago, the studio released 8 Golden Skulls of Holly Roger which is mostly the same slot, although with higher winning potential.

9 Golden Skulls of Gold is a bit easier to play due to the lower winning potential, but it can still pay solid money if you’re lucky to hit the Epic Strike jackpots.