Probably the most popular slot online is Starburst. Sparkling jewels and gemstones in different colours, that is what this video slot offers. Every player loves to play this slot. Try it here for free and find out yourself.

Details about the slot Starburst

Not all slots are created equal. Some are passing fads. They’re popular for a month or two, before they disappear off the face of the earth. Others are timeless. They’re usually releases that offer a brand new experience, usually with a lucrative jackpot to boot.

Starburst squarely falls into the latter category. It remains one of the most popular NetEnt releases to this day, in fact! So what is it that makes this 2013 classic so popular? Why do players religiously flock to it?

You play this game on a standard five reel board, with 10 fixed pay lines. The visuals still look good, despite their age. Obviously, it can’t quite compete with modern slots made by the same developer. But the view of a distant star sets up quite a calm and relaxed atmosphere in Starburst. It perfectly reflects the empty vastness of outer space. Complete with the occasional burst of action here and there when its sole special feature makes an appearance.

Though, despite the name, this release isn’t really star-heavy. At least, as far as symbol designs go! Available icons include gems of various colors and shapes. It makes them visually distinct, but it doesn’t really fit the theme. Neither does the lucky seven or the bar if we’re honest! The Wild is a neat design, however. It incorporates the colors of all existing gemstone symbols. Perfect for an icon whose role is to substitute for all those other symbols!

Fans of sweet and simple slots will enjoy Starburst. It has only one special feature, activated via its Wild! There are no Scatters or free spins here. No multipliers to boost your win, or a progressive jackpot to chase after. The gameplay design is very basic, but it works. It perfectly balances being engaging and being lucrative. Its low volatility setup won’t attract any high rollers. But it will attract casual players, the lifeblood of every online casino!

How to Play Starburst

NetEnt’s game is played on a 5×3 board with 10 fixed paylines. The paylines are distinct, since they award prizes both left to right and right to left. Punters can change their total bet by adjusting their bet level and coin value. You can wager between $0.10 and $100 on each spin, an excellent betting spread that’ll suit most players.

With just one bonus, there’s not much to talk about. Nevertheless, we’ll give it the proper attention it deserves!

Wilds can appear on the second, third and fourth reel. When they appear, they will expand to cover the entirety of that reel, and award a single re-spin. However, even if you get two expanding Wilds on the same spin, you don’t get two re-spins. To claim the maximum of three re-spins, you have to score a separate expanding Wild on each re-spin. It also gives you the best winning potential, so cross your fingers!

Play for Free
This is Starburst 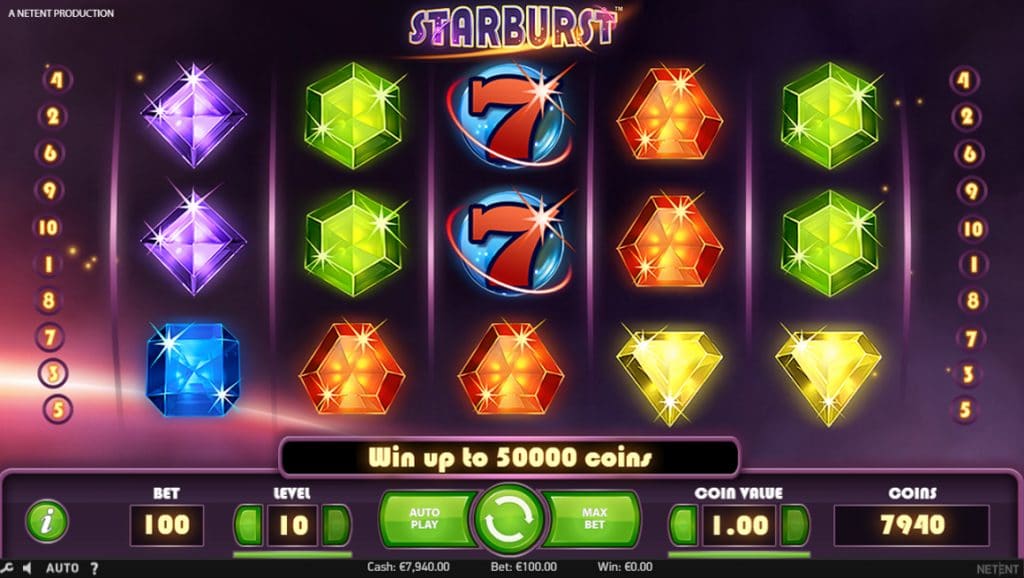 3 Symbols on a Row is a Win 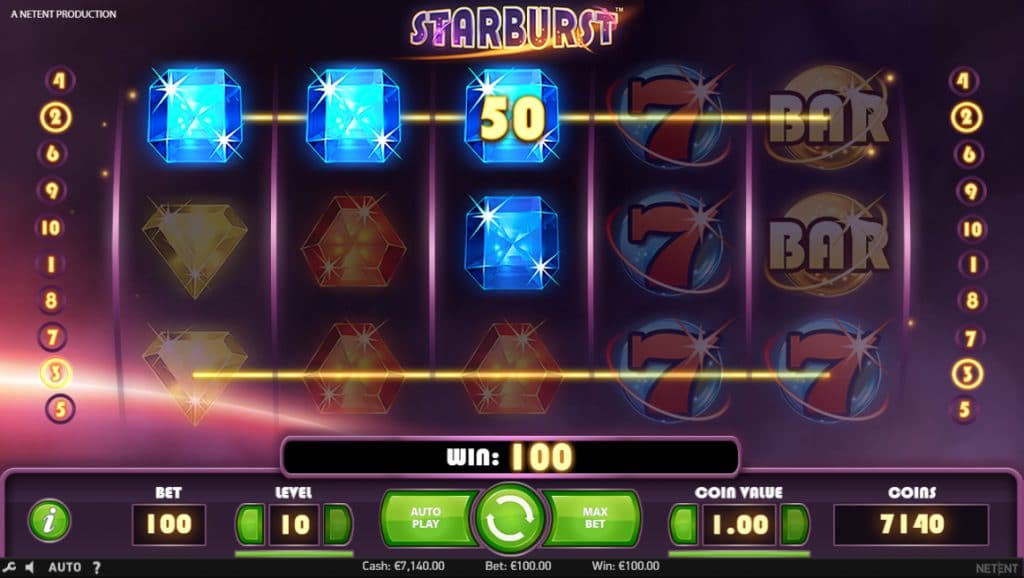 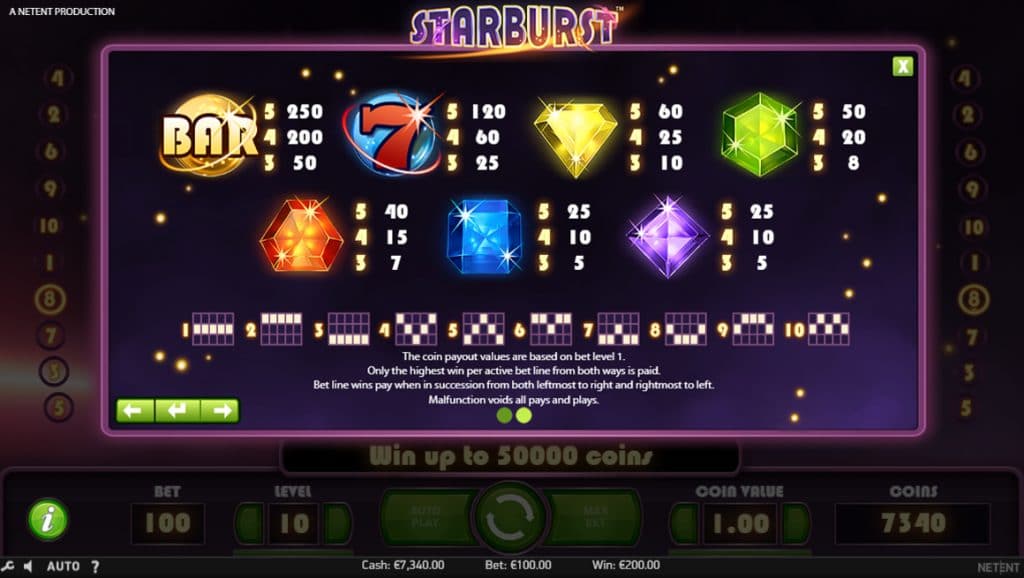 Honestly, it’s easy to see why Starburst gets so much praise. It attracted a great deal of punters because it offers a simple and elegant low variance slot. As a result, it’s become the go-to game for many casual players. Would we recommend it? For the vast majority of people, yes! The only ones that will have an issue with this release are high rollers hoping to win big. The stars have given us many gifts, but a big jackpot isn’t one of them. But to be honest, you can find Starburst at every casino site and it’s a favorite.

So if you haven’t yet tried this ‘gem’ of a game, you owe it to yourself to check it out.