Sanity is optional in the world of Wonky Wabbits slot! Read our review to find out how to navigate this weird world and win whimsical prizes! 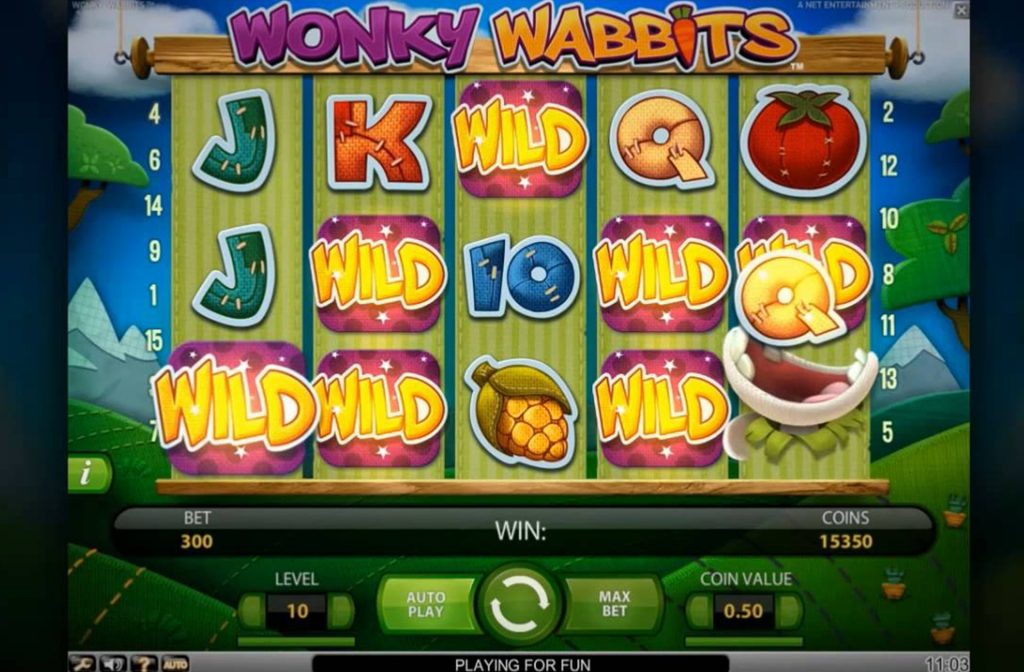 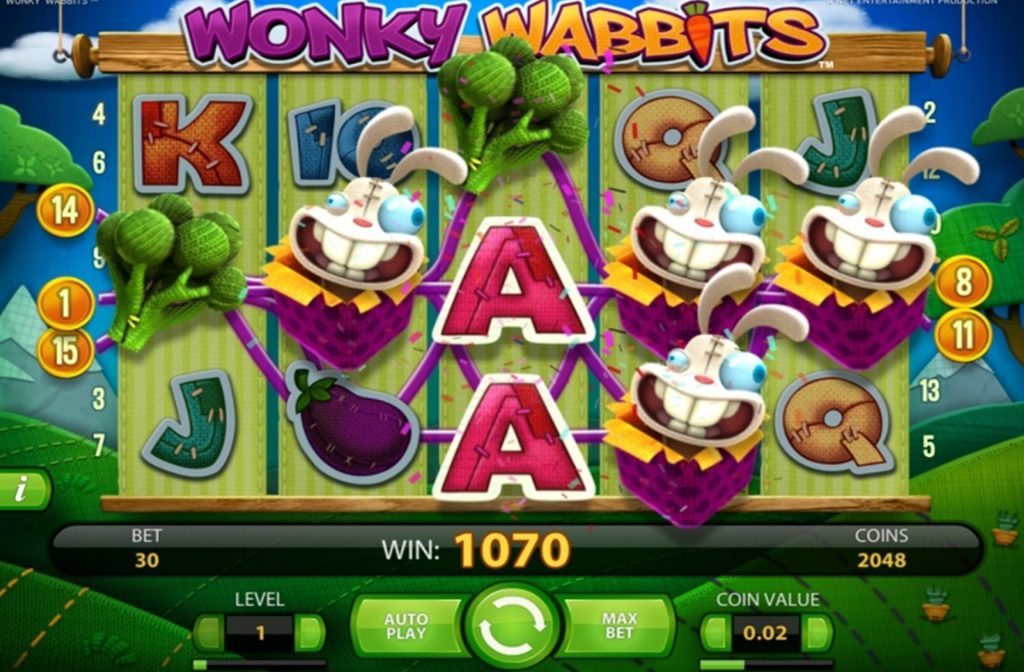 Details about the slot Wonky Wabbits

Leave what you know about reality at the door before you start playing Wonky Wabbits. Trust us, you don’t want it marred by this slot’s unique premise.

Obviously, we’re playing this up for laughs a bit, but that rabbit is legitimately creepy. We understand that NetEnt wanted to make him seem whacky, but it had the opposite effect. He just looks like he’s going to find us in a dark alley, and giggle while drawing a massive knife.

The game is played on a five reel board, with each reel being three symbols high. There are a total of 15 fixed paylines, which cannot be turned on or off. To win, simply collect three or more identical icons in adjacent position. You can win both left to right and right to left, which is a huge boon to the player! However, all wins must follow one of 15 active paylines, or the winning combination will not count.

NetEnt’s release has two special features, one of which we’ve already mentioned! Paying both ways is certainly a bonus, even if it is completely passive. Wild Duplication is the second, but equally important special feature! Each Wild that lands on the board will be duplicated in another position. And yes, we did say each Wild. Two Wilds get two duplications, three get three, and so on.

Wonky Wabbits certainly has a theme. We’re just not sure how to even describe it. Is it another world? Some kind of stitched-together nightmare realm ruled by psychotic rabbits? Or just an attempt at silliness gone horribly wrong? Probably the latter, if we’re being perfectly honest. NetEnt has an unfortunate flaw of not being able to draw faces properly most of the time. Does anyone remember Jack and the Beanstalk and his annoying mug?

The background image is an idyllic forest, with distant mountains and carrot fields as far as the eye can see. Or, to be more precise, it’s a stage made to look that way! All other visuals apart from the rabbit show a clear effort being put into them. When the birds fly past the reels, you can see their shadows following along in real time, for example. It’s just a shame that one bad element ended up overshadowing everything else.

Symbol designs are quite basic, but they do fit the theme. They’re a mixture of various vegetables and playing card royals. All of them have clearly been made with cloth, but some with more care than others. Where the carrots and tomatoes have been carefully stitched, the letters and numbers are clearly a rush job. And while Wilds seem to not fit at first glance, they’re yet another gateway for the rabbit to appear. Almost gave us a heart attack the first time he popped up out of nowhere after a win happened!

How to Play Wonky Wabbits

You play this slot on a 5×3 board with 15 fixed paylines that pay both ways. This effectively doubles your winning potential, as you can form wins starting from the rightmost side of the reel. It’s a good system, but there are more engaging ways to grant wins than paylines. We personally prefer cluster win and Ways to Win systems.

With only one special feature and a medium-high variance, gameplay will get a little repetitive. At first, you’ll be drowning in awesome cash prizes brought to you by Wild Duplications. At other times, you’ll be sobbing in a corner, hoping for even a small win to lift your spirits. This is precisely why a small number of special features and a higher volatility do not mix well, in our opinion.

Despite only having 15 paylines, your minimum stake is €0.30 per spin. This is due to the Both Ways Win bonus being active at all times. But we can’t say we agree with letting NetEnt siphon extra funds off of online gamblers like this. Especially since in their other releases, the developer did not charge extra and had paylines which paid both ways. Meanwhile, your maximum wager only goes up to €150 for each spin. Literally the worst of both worlds. Still worth the headache for a shot at the 2600x jackpot prize!

There are two special features, and both have a significant impact on how Wonky Wabbits is played. And while one is constantly active, the other can be quite difficult to activate.

Unlike traditional paylines, which pay left to right only, this bonus allows them to pay left to right and right to left. This increases your chances of winning big, so make sure to seize on every opportunity! Trust us, they don’t come up that often with this game.

When a Wild appears on the playing field, it is guaranteed to be cloned in another position. The way this position is chosen is that the computer calculates where a second Wild would be the most profitable. The Wild is then duplicated to that spot, overlaying an existing icon. This effect is tied to each individual Wild. So if three Wilds land, players get three Wild duplications.

This NetEnt release has a medium-high volatility and a jackpot worth 2600x your total stake. Wonky Wabbits has an RTP of 96.44%, which is higher than the current industry average.

Try This One for Free

Our first impression of this slot was that it would be similar to Starburst. But the medium-high variance ensured that wouldn’t be the case. Wins here aren’t nearly as frequent, and neither is the special feature. But once you hit the jackpot, you’ll forget all the frustration you’ve had with the game.

Jackpots are few and far between. And we can’t imagine many gamblers will enjoy Wonky Wabbits. Do yourself a favor and skip this one. And if you want an example of high variance done right, check out Dead or Alive 2.