Our Number 1 Casino
Play Dwarf Mine

When it comes to digging underground, nobody can beat the dwarves! And in Dwarf Mine slot, they prove it by awarding you some insanely powerful jackpots.

Details about the slot Dwarf Mine

Say what you will about dwarves, but there’s no better race to stick in the mines for some dangerous digging! Their natural ingenuity will quickly overcome any dangers, and optimize the process swiftly and efficiently.

Today, we’re taking a look at one such operation. One where everything is handled by a simple pull of the lever.

Dwarf Mine is played on a five reel board, where each reel is four symbols tall. During one of the special features, the playing field can expand, becoming seven icons tall. There are a total of 1024 ways to win. That number also increases as the reels grow, reaching a stunning 16,807 ways to win. To get the cash prize, players must collect three or more identical symbols in adjacent positions, starting with the leftmost reel.

Available special features include the expanding reels which we have already mentioned. There are also regular free spins, played on a fully expanded board. There are also four Collection free spins, triggered when gamblers pick up enough precious gemstones from the expanded reels. These give you access to super high paying icons, which you wouldn’t have access to otherwise.

Dwarves and mining go hand in hand, but we’ll admit, we had a much different idea in mind originally. Still, we’re glad that the slot didn’t decide to go down that route. Seeing a lazy overseer tugging the lever to make the machinery spin is quite cool. And it’s very amusing when you leave him alone for two seconds, and he falls asleep on you.

The background image isn’t too detailed, but it gives just the right amount of stuff to make you curious. What’s that hidden skeleton off to the side? That is that weird metal thing beneath the dwarf’s platform? And then, when the reels expand, you get a better view of all those little details you couldn’t originally make out.

Symbols are split into three categories. Low value, high value, and super high value! Low value icons include the hearts, spades, clubs and diamonds. High win symbols are the shovel, a lantern, a pickaxe and a helmet. Finally, the super high value icons are four gems: red, blue, yellow and green. These are only available during a bonus.

How to Play Dwarf Mine

This game is played on a 5×4 board with 1024 ways to win. As you collect certain symbols and trigger their associated special features, you can expand that to a 5×7 playing field. Now, you can’t rely on reel expansion to increase your odds on absolutely every spin. But thanks to this release’s medium variance, it does happen quite often!

So, we know that the bonus responsible for expanding the reels appears frequently. What about the rest of them? Honestly, everything outside of Collection free spins is little more than filler. Regular free spins are played on an expanded board, but they don’t have access to the super high value icons. And without those, you’ll never land the jackpot of your dreams.

Changing your total bet is as simple as tweaking your coin value. No need to turn off paylines or adjust multiple things to find your perfect bet. Just tap the plus or minus buttons until you find the wager that works best for you. The minimum you can stake is €0.10, while the maximum is a stunning €125 per spin. The jackpot is worth 3900x bet.

There’s a very clear progression in Dwarf Mine’s special features. Expanding reels lead to regular free spins, and those trigger the Collection free spins. We quite like that structure. Once you get a good winning streak going, you’ll seamlessly swap from one into another, which feels absolutely amazing!

Reels expand by one row when the drill bonus symbol appears on the playing field. Reels can be expanded by a maximum of three rows.

Land three bonus icons at the same time to win ten regular free spins. These free spins are played on a fully expanded 5×7 board. During free spins, the four unrefined gems can be picked up. Each gem you pick up fills the counter to the left. And once one counter is completely filled, it triggers the Collection free spins.

These free spins are also played on a 5×7 board. The key difference is that you have access to the more valuable super high paying gem symbols. And trust us, you’ll need those lucrative gems if you plan on winning the top prize in this slot.

The game has a medium variance and a jackpot worth 3900x your total stake. Yggdrasil’s release has an RTP of 96.80%, which is above the current average.

Play for Free
Dwarf Mine Gameplay 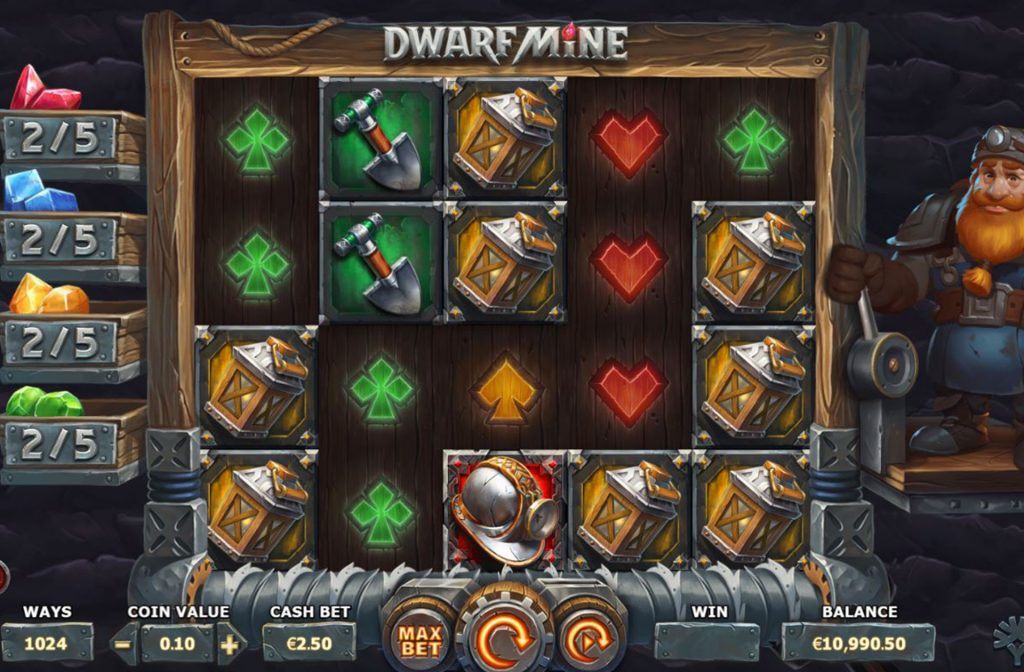 Bonus Symbols Are Great To Get 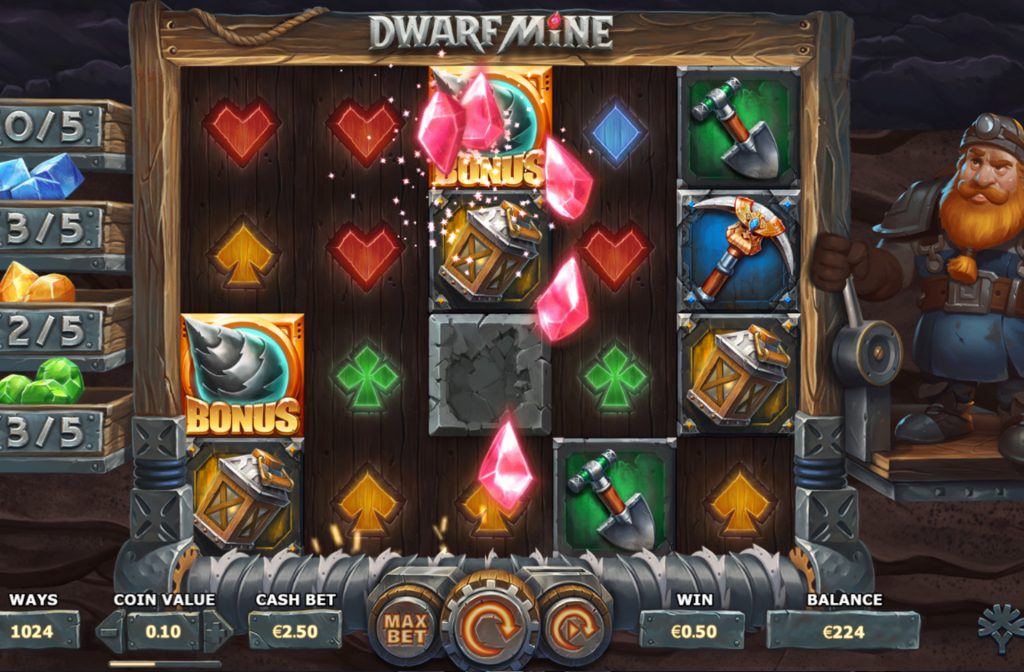 Dwarf Mine shows that you don’t need the best graphics or ludicrous special features to have a blast. What it offers is quite down to earth – dwarf miners unearthing riches using multiple free spins bonuses. It won’t be everyone’s cup of tea. But if what you’ve read in the review so far sounds awesome? Then you should definitely play it.