If a game has lasted over a decade on its progressive jackpots alone, you know it’s either really good. Read our Mega Moolah slot review to maximize your chances of scoring that ultimate prize! 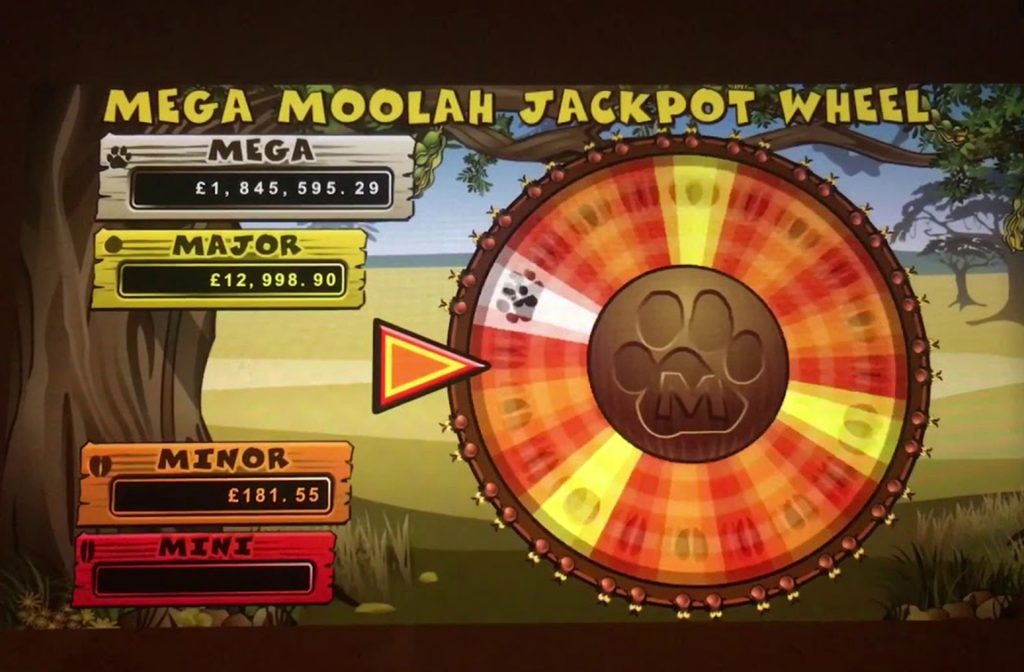 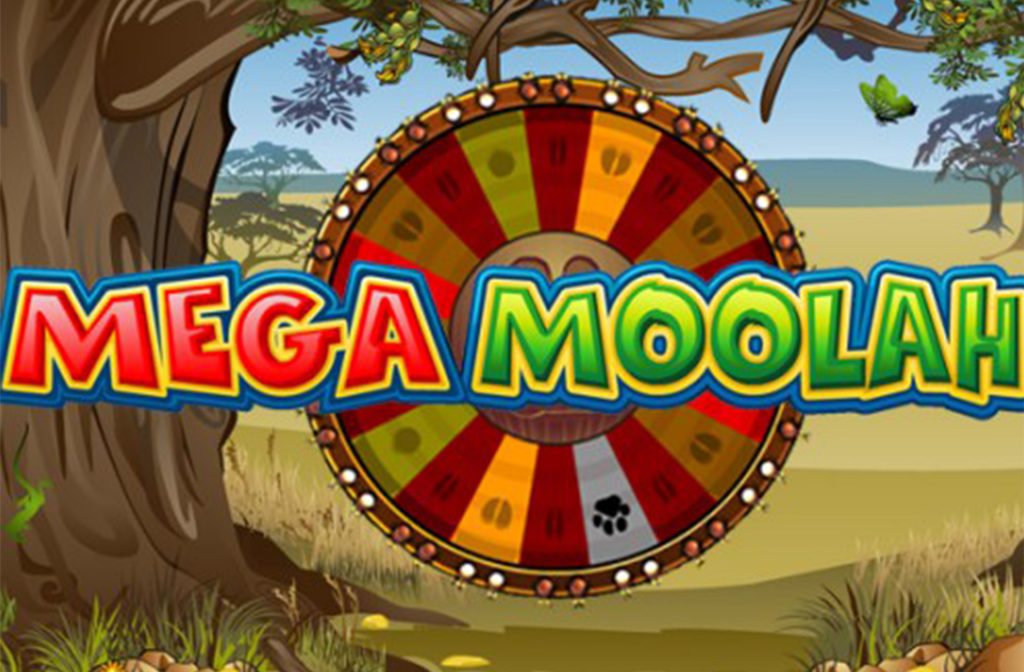 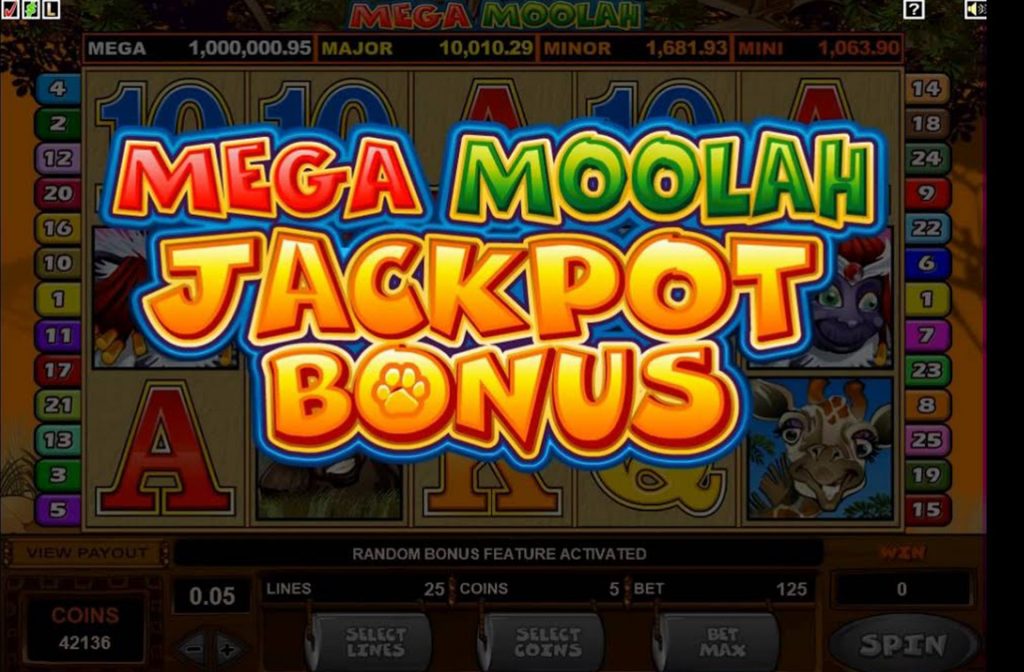 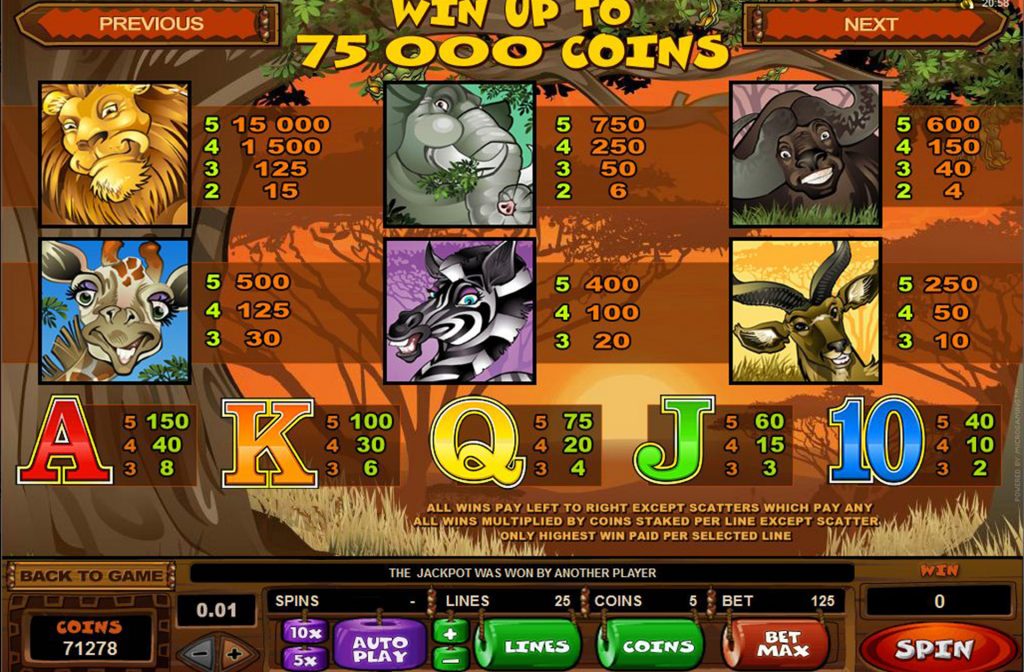 Details about the slot Mega Moolah

The African savannah is home to many interesting animals. Instantly recognizable creatures like lions, elephants, wildebeest and antelopes roam the reels of this slot.

But the reason this game has remained popular for over a decade isn’t because people like the wildebeest’s smug grin. That popularity lies in the four progressive jackpots it offers!

Mega Moolah is played on a five reel board, where each reel is three symbols tall. There are a total of 25 flexible paylines that can be turned on and off at will. To win, collect three or more identical icons in adjacent positions, starting with the leftmost reel. All wins must follow one of the active paylines, or the cash prize won’t be awarded to the player.

Available special features include the progressive jackpots, and a free spins bonus with a 3x multiplier attached. It’s quite rudimentary for our modern standards. But back in 2006, this release turned heads due to its ample generosity. Four progressive jackpots and awesome cash prizes you could win during normal gameplay, too? It got so popular that Mega Moolah still regularly reaches into the top 20 most popular slots lists.

Animals are always a safe bet when it comes to themes. So long as you keep to regular animals and don’t try to turn them human. Cough, Meet the Meerkats, cough. We don’t have much to say on this topic, unfortunately. It’s a game from 2006, so we don’t have high expectations for its graphics.

There’s no real background image for us to gawk at, either. We can see a massive tree behind the reels, but that’ about it. This is due to the limited resources available to older releases at the time. Microgaming wisely decided to focus on symbol designs rather instead of focusing on the background.

Speaking of icons, they’re split into two categories. The high value animals and the low budget playing card royals. The letters and numbers are exactly what you expect them to be. Colorful, bright, and totally not fitting in with the remaining symbols. There’s a fair amount of diversity in the animals, too. Antelopes, zebras, giraffes, wildebeest, elephants and lions can all be found on the reels.

How to Play Mega Moolah

Mega Moolah is played on a 5×3 board with 25 flexible paylines. You can turn these on and off at your leisure to find your perfect bet. However, we wouldn’t recommend doing so due to the progressive jackpots. The more you wager, the odds of triggering a progressive jackpot increase. On top of that, gamblers will see a lot of frequent, smaller pays. It would be a perfect low volatility slot, if it weren’t for one thing.

But we’ll come back to that in a bit. First, we want to talk about special features. As we already mentioned, there are only two available. Free spins with a 3x multiplier, and four progressive jackpots. Again, this was great for its time, but it hardly lives up to modern standards. Some players may like it extremely simple, but we’re not one of them.

To change your total bet, you have to adjust the number of active paylines, the number of coins, and the value of each coin. This feels needlessly complicated. Especially when compared to modern games, where you usually just have to press a button and pick your wager. You can bet between €0.25 as a minimum and €6.25 as a maximum.

Both special features are simple to understand and incredibly lucrative. They’re actually a little too simple for our liking, but that’s a subjective preference.

Three or more Scatters grants gamblers 15 free spins where all wins are tripled.

There are four in total, all of which can be won randomly. You can increase your chances by playing at a higher bet level. We’re not big fans of bonuses that openly favor high rollers compared to other players. They’re no less worthy of scoring that jackpot just because they have less money to spend.

Mega Moolah has a low-medium volatility and four progressive jackpots to enjoy! The slot’s RTP is 88.12%, which is abysmally below the current industry average.

In many ways, our experience with this game is tainted by the lens of time. If we played this in 2006, we have no doubts that we’d put it in our top five. But now, many years down the line, after being exposed to wonders of modern releases? We’re afraid we can’t get excited for Mega Moolah anymore.

If you’re after the awesome top prize and don’t care about anything else, then this slot will be awesome for you. But if you’re looking for gameplay diversity or truly impressive visuals, this game can’t provide that. It’s a relic of a bygone era, whose progressive jackpots are the last thing keeping it alive. And until a worthy successor appears, it will remain the dream of many gamblers.