Many valuables await in these sprawling, underwater depths. If you’re dedicated enough, you can get some awesome wins from Gemtastic slot!

Details about the slot Gemtastic

Visuals are important. Not as much as gameplay or pays, don’t get us wrong. But you only get one chance at a good first impression, and good graphics are needed for that.

And this slot absolutely nails that feeling! One look at the board will make you feel excited, claustrophobic, and a little scared.

Gemtastic is played on a six reel board, where each reel is five symbols tall. There are a total of thirty fixed paylines, which you cannot turn on or off. Not that you really need to. The game is generous enough to give you a minimum spin of €0.10, far below what we expected. Collect three or more identical icons in adjacent positions to win. All winning combinations must start on the leftmost reel, and follow one of the active paylines.

There’s a few special features available to online gamblers, and we quite like all of them. Cascading reels means that each spin could land multiple wins. Each chained win increases your Lava multiplier, which goes up to 15x! There are also less valuable bonuses, like transforming Wilds and Mega symbols. And yet, no free spins.

As the popular saying goes, ‘There’s no such thing as free lunch.’ Red Tiger Gaming added just the right amount of creepy to keep players on edge. If you let Gemtastic idle, you’ll hear weird noises and creepy footsteps on the very edge of your hearing. Which is extra creepy, considering you’re underwater. Far from anyone who can help. With something slowly creeping up behind you. Getting closer. Closer. Closer..

Moving on, let’s talk about the background image! It may not be the most colorful or impressive, but it still impressed us a lot. The slow rising of the bubbles was a particularly nice touch. It also shows just how massive the cave really is. You can’t see the bottom or the top. Just the edges, and you wouldn’t even see those if it weren’t for the light reflecting off the gems.

We hope you like gems, because there’s no other icons on the board. Different colors and shapes create a distinction between low and high value precious stones. But at the end of the day, they’re all gems. They’ll earn you a pretty penny no matter who you sell them to. That is, if you can make it out of the cave with your loot and life still with you!

How to Play Gemtastic

The slot is played on a 6×5 board with 30 fixed paylines. Each spin comes with cascading reels enabled. Each time you win, the participating symbols will disappear, leaving room for existing ones to take their place. Brand new ones then fall on top of the empty spots, allowing for multiple wins for the price of a single spin. Toss in the special features, and you have an awesome high volatility game on your hands.

One look at the available bonuses will show that not all special features are created equal. The multiplier is uniquely positioned to improve your wins and award the top prize in this Red Tiger Gaming release. Every other bonus is just there as an occasional boost while you’re hunting the jackpot. They’re situationally useful at best.

Gemtastic doesn’t bother with boring things like coins or turning paylines on and off. Instead, players press the Stake button to reveal a dropdown menu with all available bets. Your minimum stake is €0.10 per spin, which is an awesome asking price for 30 fixed paylines. In contrast, the largest wager only goes up to €100 per spin. Not that you’ll complain if you win the 10,000x jackpot with that bet level!

It takes talent to pull off a slot with no free spins, and Red Tiger Gaming has proven they have enough to spare! While not all special features are equally awesome, they’re all important in their own right. Nobody cares much for the Mega icons until they help you land the jackpot of your dreams!

Your initial win grants a 2x multiplier, and every consecutive win afterwards increases said multiplier by one. So long as the winning streak continues uninterrupted, your multiplier keeps increasing, to a 15x maximum. If you plan on winning the top prize in this game, you’ll have to make good use of multipliers. So cross your fingers and hope luck will be a lady tonight!

On each spin, a different gem will have a multi-colored glow surround it. If these highlighted symbols create a winning combination, a re-spin will be played where these icons turn into Wilds. The magic glow can also affect Mega symbols, which break up into smaller Wilds for the re-spin.

The game has a high volatility, and a jackpot worth 10,000x your total stake! Red Tiger Gaming’s release has an RTP of 96.07%, which is the current industry average. 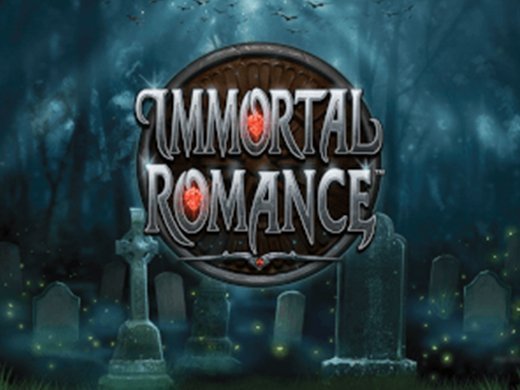 Play for Free
Wilds Are What You Want 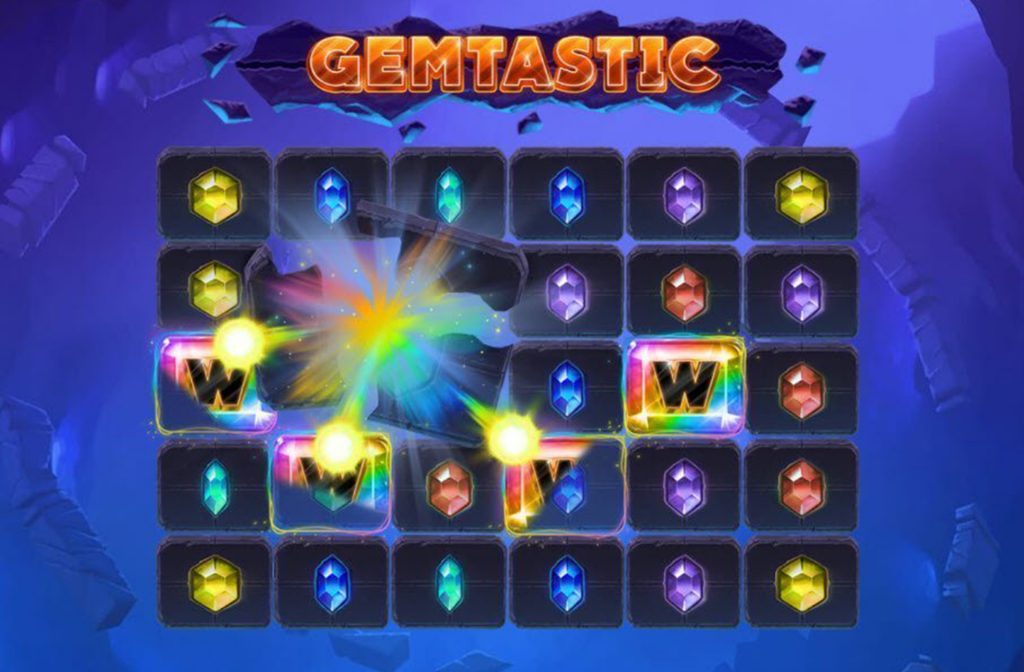 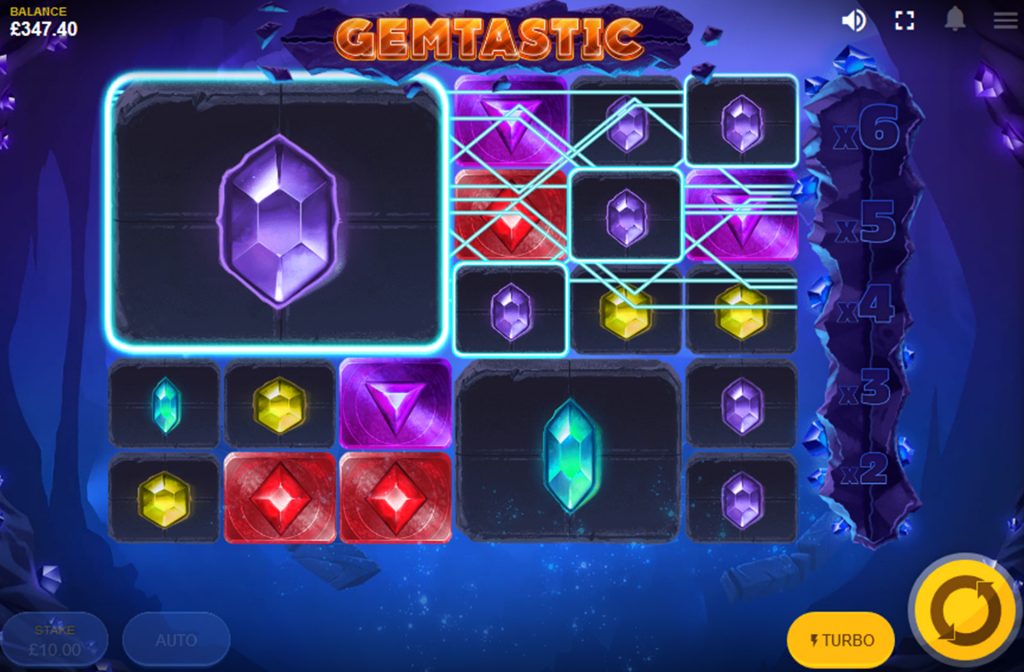 We hesitate to call Gemtastic generic, because it’s not. But it’s far from an original idea either. But we don’t plan to hold this against the slot, specifically because of how much effort the developer put into it. The aura of slight dread permeating the game during its few quiet moments shakes up the boring gem spam, winning us over.

Just comparing these two categories should tell you how much we loved this game. We’d praise it even more, but then we’d have less time to play it. So, to sum it up in two words? Play it!